We all love to look at red carpet hair because it’s the one time women get to pull out all stops and get their glam on and this year’s Oscar’s red carpet was no exception.  The mood was old Hollywood, but done in a very contemporary way, made modern by each woman giving their own stamp of individuality to the look.  Everyone looked a little bit different, with their hair and makeup as customized as their couture dresses.  The good news is that while a haute Dior dress is out of reach for many women, the hair styles are infinitely attainable.  And, you don’t have to have long, beautiful tresses to like a million.  Here, six of my favorites from the Oscars and how to get the look.

The Long Story:
Side-swept curls ruled the red carpet at the Oscars, ranging from tight barrel curls on Sandra Bullock to softer waves on Kate Hudson.  The good news is that you don’t even need a curler or curling iron to achieve some of these looks. 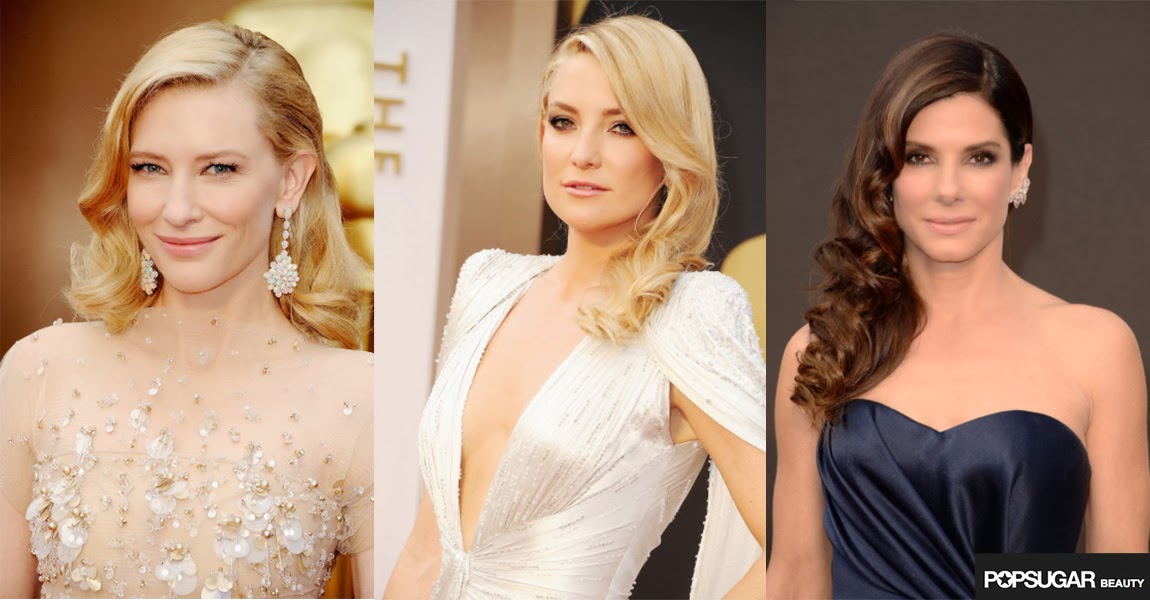 Sandra’s hair had the tightest curls, and the biggest sweep.  To get this look, start with a good blow dry, the push all the hair to one side in the back, pinning with large bobby pins at the nape then covering with the hair.   Starting from the back, take two to three inch section, spray with setting spray and roll around the barrel of a 1 ½ to 2 inch curling iron vertically.  Release downwards, but don’t comb out the curl.  Keep going forward in this way until you reach the section of hair that frames the face.  Here, just curl the top and middle section of the hair, leaving the end out.  The key is to leave all the curls as is, not raking it with your hands or combing.  Give it a good dose of hair spray to hold.

Cate Blanchett’s hair used an entirely different technique from the 1940’s to create her screen siren look.  Here, part hair on the side, then take small sections of hair that are triangle shaped at the root, narrower at the ends, spray with setting lotion then brush towards face, rolling it up with your fingers and pinning at the scalp standing up like a roller-less set.   Do this for both sides of the hair.  Do your makeup, then take out the pins.  Brush just enough to smooth into place then spray with hair spray.   Because it’s curled under, hair has no volume at all on top, which gives it that retro, Rita Hayworth look.

The loosest curls of the night go to Kate Hudson.  Here, her hair part was the most exaggerated move of the style, giving the illusion of side swept hair, kind of like a modern version of Veronica Lake.  Blow dry to start, then make the part deep on the opposite side so that the front sweeps over one eye.   Here, use Velcro rollers to set hair, similar to Cate Blanchett’s set, brushed towards face then rolled under and pinned.  Release once dry and lightly brush around the face only to put into place.  Tuck the other side of hair neatly behind the ear, and spray.

The Short Story:
Short hair is easy but it doesn’t have to be boring.  We had three good examples of this on the red carpet Oscar night.

For example, BEAUTIFUL Lupita Nyong’o is proof that super-short hair doesn’t have to look the same all the time.   We’ve seen her wear it sleek and smoothed back to the head, parted, and now, with volume.  Her hair was teased at the back of the crown and left with great texture, smoothed in the front with a gorgeous head band.  I don’t think any woman looked as flawless as Lupita at this year’s Oscar’s.

Although my second runner up would be Charlize Theron.   She always bucks the system, wearing a black dress (pretty much verboten) on the red carpet with such style, and rocking growing-out Soccer Mom hair like nobody’s business.   Side part and sleek to the head with a fabulous necklace was the way to make her look regal and flawless.

Jennifer Lawrence modeled a great faux up-do, yet another option for seemingly optionless short hair.   To do, blow hair back off the face, then spray and set hair in the middle section of the head in one row from front to back like a Mohawk of Velcro rollers, leaving the sides tight to the head.  Take them out when fully cooled and dry, then run your fingers through the top of the hair in lieu of a comb to sculpt into place, then spray.
Posted by Unknown at 2:02 PM 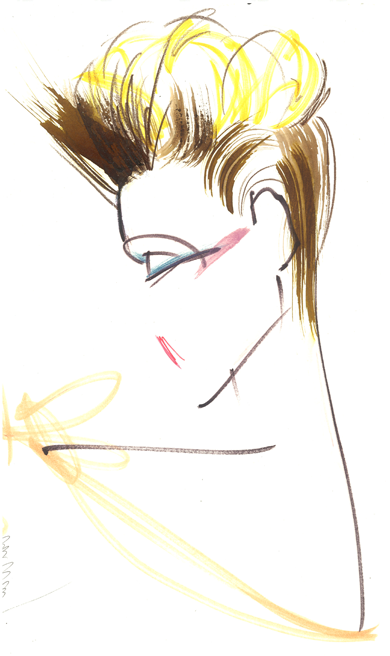